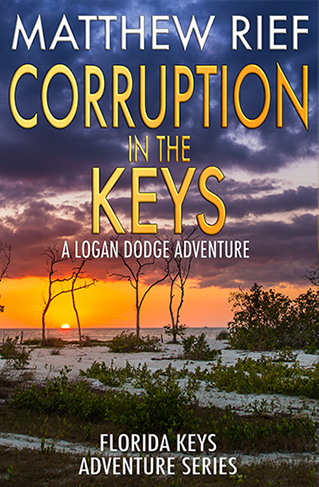 Corruption in the Keys

Enjoying a semi-retirement lifestyle in paradise, Logan Dodge is spending an afternoon fishing in the Lower Keys when a runaway boat crashes into a nearby island. After discovering two injured scientists on board, it soon becomes evident that it was no accident.

The smart thing to do would be to stay out of it. But the former Navy SEAL and mercenary has never been good at standing by and minding his own business while evil plans unfold. It isn’t long before Logan and his friends are swept up in a fight against a ruthless enemy and a race against the clock. If they fail, South Florida could experience the worst environmental disaster in its history.

In order to come out on top, they’ll have to beat a corrupt billionaire, a beautiful and powerful former enemy, and a team of highly trained killers. The clock is ticking for Logan in this car chasing, fists flying, parachuting, heart pounding romp in the Florida Keys.